So, as many of you know. I went on a girly holiday with one of my best friends, Chloe. It was my first holiday abroad without my parents. Most 20 year olds would be excited for the independence. Instead, I was pretty nervous as my friend had never been abroad before and therefore it was more pressure for me to lead us through the airport etc. As you can imagine trying to listen to things in a busy airport is a NIGHTMARE because of my deafness! Myself and my friend decided that it would be best if she was 'the ears' and answered any questions and I led us through the airports as I was familiar with the environment. It worked well! A great team we are!

Fast forward to Ibiza. It was lovely! Really really hot! The locals were friendly but hard to understand! The hotel workers all had Spanish accents too, some Spanish people we came across, I was able to understand and others... Well, I won't go there! So frustrating! Accents and me do not go well together! 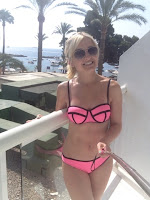 We spent most of the holiday chilling on the beach or by the pool. It was nice and there was little pressure as we relaxed. Although, one particular day, we decided to visit the water park which was "around the corner" as we were told! I reckon it was a good 3 or 4 miles I would say! Not good! The rep was very vague with directions, so we had to ask the locals for directions... THAT is where my friend came in. I felt helpless standing there, but there was nothing I could do about it. I simply couldn't understand their accents!

The water park was fun, regardless of not hearing anything! We went on this big slide where people race down and the lifeguard blows a whistle which signals when to go... Who came last? ME! Oops! I had to watch the lifeguard but obviously I wouldn't hear the whistle as I am pretty deaf without my hearing aids. My friend decided to tap my leg when the whistle went the next time. I was still late letting go of the bar, but hey! I had fun even though I lost each time! Haha! 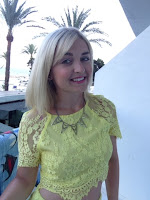 As we got tired we decided to head back. My hair was still wet so I couldn't really put my hearing aids in as I didn't want to risk them getting damp. So I let my hair dry. Only problem was, we had to walk back to the hotel. Quite a challange crossing the roads I must admit! I relied completely on my vision when crossing roads. I'm lucky to be alive I reckon! The roads out in Spain are nothing like England. The people driving them certainly aren't! Zebra crossings for example, most of the time people stop and let you cross. Not one single person stopped! It was a nightmare crossing roads! I had to grab on to my friend and we had to run whilst I was looking all around me frantically. Haha! Probably looked bonkers. But it's better than getting hit by a car isn't it! It's safe to say, I never want to experience that again! Phew! 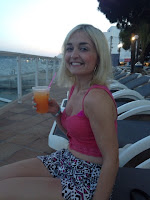 The hotel was lovely. The only let down I must say, was the fact that we had to wait for 8 hours for our room! Pretty stressful when you've just been travelling and just want to lay down on your bed. Nightmare! It was frustrating for myself as I kept complaining as they said "your room will be ready in 1 hour" and I went back each hour and it still wasn't ready. I then complained as it got ridiculous, the receptionist lacked basic English and ME, well I lacked hearing and couldn't understand half of what he said! Nightmare! ... We got there eventually! ... 8 hours of waiting!

The holiday went by quickly and soon came to an end and it was time to board the plane. We went with Thomas Cook. Only thing I could fault them for is their TV screens. I have tweeted them regarding this. I think that their screenings should have subtitles on. I didn't actually have any headphones on me. But that wouldn't do much for me as I rely heavily on subtitles. There were some things that I wanted to watch on the TV but couldn't, because there were no subtitles. Whether or whether i didn't have headphones. I think all flights should have subtitled screenings to make them inclusive.

Anyone with questions or comments, feel free to ask me anything! I'm interested to hear!
Louise x

Email ThisBlogThis!Share to TwitterShare to FacebookShare to Pinterest
Labels: Deafawareness