Deafness struggles on the train

I'm writing this as I am waiting for my train connection.

This morning I travel on my usual two trains from my home town to the city of Norwich. Usually I keep my head down and keep myself to myself. I travel alone and feel exposed because I find it really difficult to hear on the train, due to my hearing aids amplifying the engine, droning down the vocals of other people.

The train was pretty crowded this morning so I had to stand near the door. I turned around and this man was looking at me and I turned back around facing the door again, then I turned back facing him to see if he was still looking. He actually asked me a question and I didn't hear. 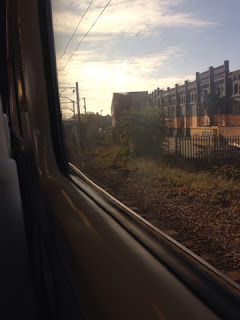 I was standing in the passageway so I immediately assumed he wanted to get past, so I moved. He looked at me puzzled and then I knew that he didn't ask me to move. Instead he repeated the question again. This time all the people nearby had turned around and were watching me embarrass myself further. Instead, I built up the courage to say in a jokey tone "I'm a bit deaf sorry!" ... That's not really the ideal way to describe my 'severe to profound" hearing loss. I couldn't hear what he said and all I could hear was the roaring engine of the train and the bumps on the train track.

This lady sitting nearby just laughed a little and thought I was just being funny. She didn't actually realise I wasn't joking. She then repeated to me what the man had said and I didn't hear her either. She then laughed a little more.

Now I know you're probably thinking that I could have handled the situation better, yes, I agree. It's just the matter of building my confidence to find ways around things and thinking on the spot. So I stood there just wanting the ground to swallow me up. I remained strong and composed and stood there feeling incapable.

Around 5 minutes later, the lady next to me bent down to the floor, reaching into her bag, and pulled out a notepad and a pen. She then wrote down "the man asked where you were going" I then looked at her and said "OH!!" She then wrote "London?" And I turned to him and said "Norwich!" ... Even though the conversation had passed and it looked a bit random. I felt a little bit better. I usually have a bit of a support with me to help me out. My boyfriend and my Mum are brilliant. I don't know what I would do without them. Instead, I received a little support from a complete stranger! It really restores my faith in mankind!

Isn't it amazing! The littlest things people do, can make such a big positive impact on someone! It's a shame I never got to thank her properly as she rushed off the train. But I hope she knows how grateful I am!
Posted by Goldy at 02:43